Elk NetworkCollect Wyoming Roadkill? There’s an App for That 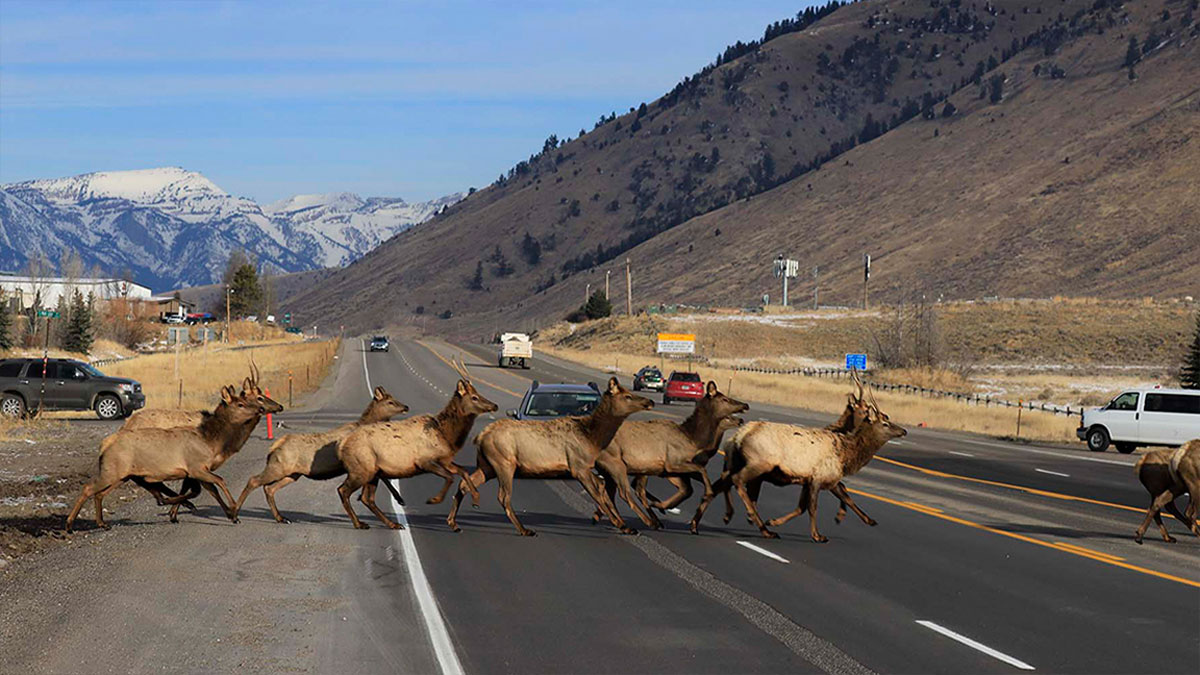 3/23/2022 Update: Below is part of an email forwarded to the Rocky Mountain Elk Foundation by Wyoming resident Wesley Womack.

So, the photo used for this article is taken RIGHT in front of my house. On the left there, behind that gray SUV, is my house. Sadly, a moose also got whacked right here in front of my house, literally in this photo location, a week ago. I was looking out my window and saw the commotion. Well, by golly, that’s a lot of good meat, so I was there in less than a minute and I had the thing already claimed using the new 511 app before the sheriff was done with the accident report. The game warden arrived and was kind enough to help me load ‘im up (see photo below) into my truck for the “long” haul 100 yards to my garage for processing. Below is a news release from the Wyoming Game & Fish Department.

Collecting roadkill? There’s an app for that. The Wyoming Game and Fish Department and the Wyoming Department of Transportation recently launched new features to the Wyoming 511 mobile app to send authorization for those seeking to collect roadkill. The app is available for Android™ and Apple devices and is the easiest way to request permission to pick up roadside carcasses.

Collecting roadkill from select Wyoming roadways became legal in January. Now, people can request authorization to salvage deer, elk, antelope, moose, wild bison or wild turkey from unintentional vehicle collisions with wildlife. There are some restrictions to collection. Namely, anyone collecting roadkill must receive authorization from Game and Fish before collection. That can be done through the Wyoming 511 app, even without cellular service.

“We’re grateful to be able to work with WYDOT to integrate the roadkill collection authorization into their already well-known and highly-utilized 511 app that many are already familiar with and have installed on their devices,” said Brian Nesvik, Game and Fish director.

Integrating roadkill authorization into WYDOT’s app seemed like a natural fit, given the road and location data infrastructure existing within the app already, as well as the close collaboration between the two state agencies on wildlife – roadway safety and developing the stipulations around roadkill collection with an emphasis on safety.

“We continue to have a great partnership with Game and Fish,” said WYDOT Director Luke Reiner. “I think this tool will be a great asset to road users wanting to collect roadkill on our highways, allowing them to do so in a manner that is as safe and efficient as possible.”

Safety considerations bar people from picking up carcasses from extremely busy roadways, such as Interstates 25, 80 and 90. It also disallows collection in active construction areas and within national parks in Wyoming. Other rules outline where to park for collection and the use of emergency flashers, as well as banning field dressing on the roadway.

“Safety is our main priority with any roadkill collection,” said Rick King, chief of the wildlife division. “Anyone who picks up roadkill should operate with a safety mindset, remain cautious on the roadway and follow all guidelines.”

Limiting the spread of disease is another concern. For wildlife managers, preventing the spread of chronic wasting disease is the foundation for requirements such as taking the whole animal — both edible and inedible portions —  and following all carcass transport and disposal procedures — same as a hunter.

To start, download the Wyoming 511 app from your device’s respective app store. For those who have the Wyoming 511 already on their phone, the update might require users to reinstall the app for the new features. To request authorization through Wyoming 511, look for the “Report Roadkill” button on the app’s homescreen. Following a question series about the carcass, if the species is available for collection in an approved location, the user can request authorization. The app immediately sends a certificate upon completing the questionnaire. Requestors must currently have or create a username and password with the Game and Fish to gain authorization.

Game and Fish will be reviewing all the applications and can follow up with anyone to confirm the legitimacy of collection requests. The department reminds anyone collecting roadkill that under the new roadkill collection laws, the public is not authorized to euthanize an injured animal and the meat cannot be donated to nonprofit organizations.

Full collection guidelines and the regulation are available on the Game and Fish website, as well as a desktop authorization form for people without smartphones.