Elk NetworkMissouri Volunteers Remove the Past, Clearing the Way for the Future 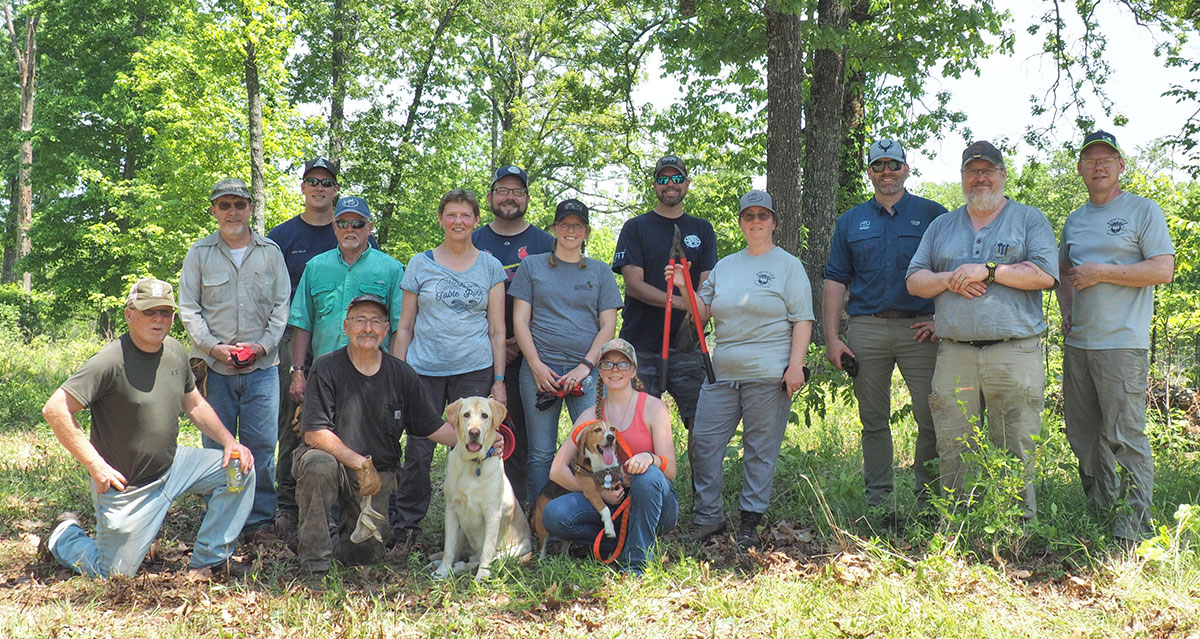 Deconstruct it, and they will come. Volunteers for the Rocky Mountain Elk Foundation heard that call, and then took action.

They gathered for the 2022 Missouri Rendezvous in the Peck Ranch Conservation Area in the southeast part of the state. The goal was to remove fencing, sideboards, chutes and other portions of the enclosure used at the original elk restoration release site back in 2011.

With smiles on their faces and armed with wire cutters and work gloves, volunteers from several RMEF chapters across Missouri used a tractor and lots of sweat equity to remove and haul off metal fence posts, roll up fencing and clear the area.

Like every RMEF rendezvous gathering, the hands-on work project is key but that’s only part of the weekend. Men, women, boys and girls gathered for brats, burgers, workshops, camping and other activities at the Circle B Campground in Eminence, Missouri.

“It was a great turnout for the first year back working for Missouri elk country,” said Jordan Brown, RMEF regional director over Missouri and Kansas. “We had a meaningful project where volunteers were the keystone in accomplishing an astonishing amount of work for the few hours we were there, but we have a lot of work left to do.”

Volunteers are already looking forward to the 2023 Missouri Rendezvous. It’s scheduled for the weekend after Mother’s Day next year.

Work projects aside, Missouri’s volunteers across 13 chapters also play a vital role in carrying out meaningful conservation work in the Show Me State by hosting fundraising banquets, conducting membership drives and hosting other events. Thanks to their efforts, RMEF and its partners completed 140 conservation and hunting heritage outreach projects in Missouri since 1991 with a combined value of more than $3 million.

These projects enhanced 11,004 acres of habitat and not only set the stage for the restoration of wild, free-ranging elk to their historic Missouri range more than a decade earlier, but that work made it possible for the state’s first-ever managed elk hunt to take place in 2020. Now, the state and its elk hunters are gearing up for the third elk hunt later this year.

“We are a volunteer-driven organization, and the Missouri State Rendezvous doesn’t happen without those dedicated volunteers showing up and giving their time, energy and financial support. We appreciate and salute them,” added Brown.