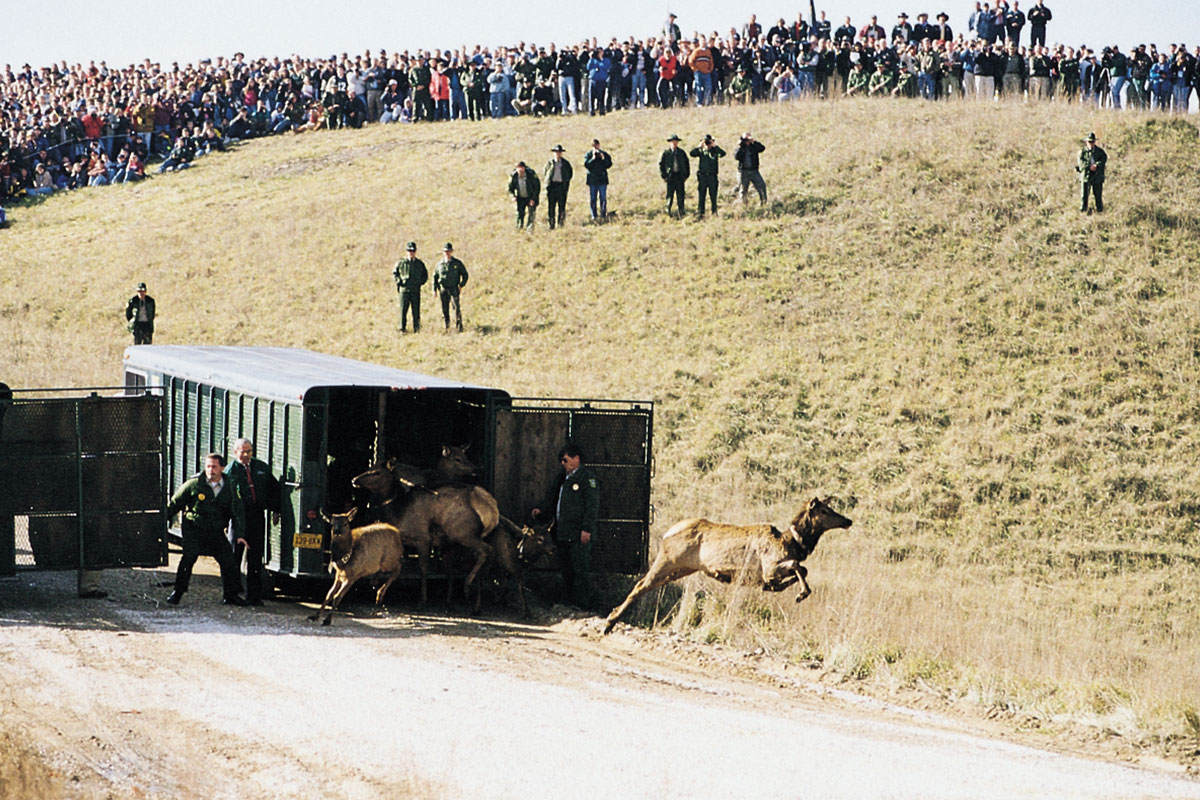 On December 17, 1997, more than 4,000 people, including 52 busloads of school children, watched and waited breathlessly on Potato Knob. And then it happened. The doors of a trailer flew open and seven elk sprinted to freedom. For the first time in more than a century, wild, free-ranging elk were back on their historic Kentucky range.

Fast forward to 2021 and there are now more than 11,000 elk in Kentucky. How did it happen? Two words: commitment and volunteers.

The Rocky Mountain Elk Foundation played a major role every step of the way from capture to release. RMEF worked with the Kentucky Department of Fish and Wildlife (KDFWR) to carry out a feasibility study to determine whether returning elk to their native range would work in the first place. RMEF also provided more than $1.4 million dollars to assist with that first relocation of elk from Kansas to Kentucky as well as subsequent reintroductions from other states over the next five years.

And let’s not forget about RMEF volunteers, hundreds of them. At the time, they spurred RMEF to take notice, get involved and make those significant financial commitments. They beat the bushes with other partner groups to raise more than half a million dollars. They were on the ground at Potato Knob in southeast Kentucky for that first elk release and assisted with other efforts since.

It’s a rich volunteer tradition in a state known for horse racing, bluegrass music, moonshine, coal and yes, what is now the largest elk herd east of the Mississippi.

“Though not large in number, our volunteers in the Bluegrass State are a strong and faithful bunch,” said Kris Lofstrom, RMEF director of eastern operations. “They have a get-it-done history that they only perpetuate to this day.”

Today, there are six chapters and more than 2,200 diehard members of the Rocky Mountain Elk Foundation in the state. They host chapter banquets, membership drives and other events that raise funds that are put back on the ground in their backyard.

Dating back to 1995, RMEF and its partners have completed 190 conservation and hunting heritage outreach projects in Kentucky with a combined value of more than $9.1 million. These projects enhanced 4,517 acres of former reclaimed strip mines that now serve as thriving elk habitat. And volunteers remain a key cog in raising funding for current and ongoing conservation work in their home state

“It’s who we are and how we roll,” added Lofstrom.