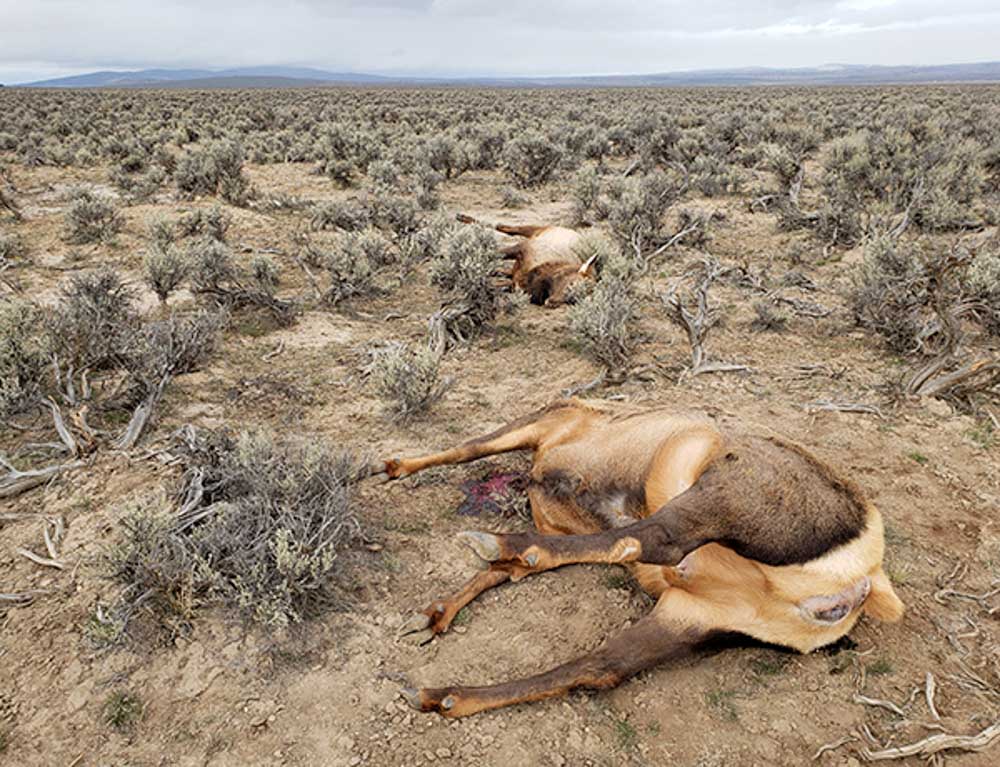 Sentencing is complete for two Hines residents involved in killing at least seven elk while shooting into the fleeing herd in December 2021. The crime left two calves, two cows and a spike bull rotting in high-country sagebrush. Chris Lardy and his wife, Stephanie, were convicted of multiple wildlife offenses on May 20, 2022.

Mr. Lardy must write and publish an apology letter in the Burns Times-Herald as part of his sentence. In addition, the pair must take hunter education courses to regain hunting rights following three-year suspensions. And they will pay a combined $2500 in fines and restitution, according to Harney County officials. Mr. Lardy’s sentence included six days in jail, 18 months of bench probation and he is prohibited from participating in any hunting activities, including as an observer or mentor, for three years. Troopers confiscated three rifles, which were later returned.

According to officials, witnesses hunting in the Juniper Unit in Harney County mid-day on Dec. 11, 2021, called the Turn In Poachers (TIP) line when they saw the driver of a blue and white suburban leave a spur road east of Hwy 395 to pursue a herd of about 100 elk through open ground and sagebrush. Witnesses said the driver stopped twice as occupants fired at least 30-40 shots into the fleeing herd. OSP F and W Troopers solved the case during a traffic stop the next day.

The Lardy couple and two passengers in their suburban had four tags for a late-season antlerless (cow) elk hunt. Stephanie and another person in their hunt group legally tagged two cow elk. They left five elk to waste and allegedly wounded another elk which OSP F and W Troopers did not find.

Evidence collected by OSP F and W troopers indicated the driver travelled about 300 yards through sagebrush, stopped to shoot into the herd, then continued in pursuit. After traveling about 400 additional yards through sagebrush, they stopped again to shoot into the herd, killing two cow elk and a calf. They gutted the two cows, loaded them into their vehicle, and left the area.

The following day, Troopers from the OSP Fish and Wildlife Division followed tracks left by the vehicle and scouted the area for killed and wounded animals. Troopers located carcasses of two cows, a calf, and a spike bull about 200 yards from tire tracks marking the first stop. They located a calf carcass about 60 yards from the second stop. All five elk had been left to waste and the meat was not salvageable. Troopers also found gut piles from the two legal cow elk.

Later that day, OSP F and W Troopers near Hwy 395, not far from where the incident occurred, conducted a traffic violation stop on a vehicle matching witness’ descriptions. The driver, Chris Lardy, told Troopers he and his passengers were on their way back from hunting the same area where their hunting group filled two antlerless elk tags the previous day.

When Troopers questioned him about multiple dead elk shot and left to waste the previous day, Lardy said he or one of his passengers had wounded an elk in the leg. No one in their hunting group had conducted a search for dead or wounded animals because they did not have time. Chris had returned to the area that day hoping to fill their hunting group’s two remaining tags.

Chris Lardy was convicted of taking a bull elk out of season and exceeding the bag limit of elk. Stephanie Lardy pled guilty to Aiding/Counseling in a game violation.
The case is frustrating to wildlife managers, hunters, and troopers. Not only is it a disregard for wildlife, but also for the safety of others in the field, according to OSP F and W Sergeant Erich Timko.

“Each hunter is responsible for every round they fire,” Timko said, “And hunters have a responsibility to make a reasonable effort to track and retrieve potentially wounded wildlife. This is a prime example of when that is not done. These are egregious results. However, even more so on antlerless hunts, it can be difficult to pick one specific animal and stay on target. And at times, you must make that decision not to fire unless you are 100 percent positive you are shooting at that animal. If you cannot be 100 percent positive of your target, then you have responsibility not to take that shot.”

“There are so many facets of wrongdoing in this case,” Wolfer said, “These people acted in blatant disregard for the elk, hunting laws and basic hunting ethics. To chase the elk with a vehicle and then leave five elk to waste because they didn’t check to see what they may have hit is almost unbelievable.

Activities like this earn the ire of hunters across Oregon, according to Duane Dungannon, State Coordinator and Magazine Editor for the Oregon Hunters Association.

“Elk in Oregon’s high desert are amazingly elusive even in open country and a challenge for hunters to pursue, so it’s a terrible shame to see them needlessly wasted like this,” Dungannon said.

“Any ethical and responsible hunter knows that you only shoot at one animal, and then follow up on that animal. It’s not a video game.”

The Stop Poaching Campaign educates the public on how to recognize and report poaching. This campaign is a collaboration among state agencies, sportsmen and other conservationists, landowners, and recreationists to engage the public in combatting Oregon’s poaching problem. Our goal is to: Incentivize reporting on wildlife crimes through the TIP Line; Strengthen enforcement by increasing the number of OSP Fish and Wildlife Troopers; and Support prosecution in becoming an effective deterrent. The campaign helps to protect and enhance Oregon’s fish and wildlife and their habitat for the enjoyment of present and future generations. Contact campaign coordinator Yvonne Shaw for more information. [email protected].