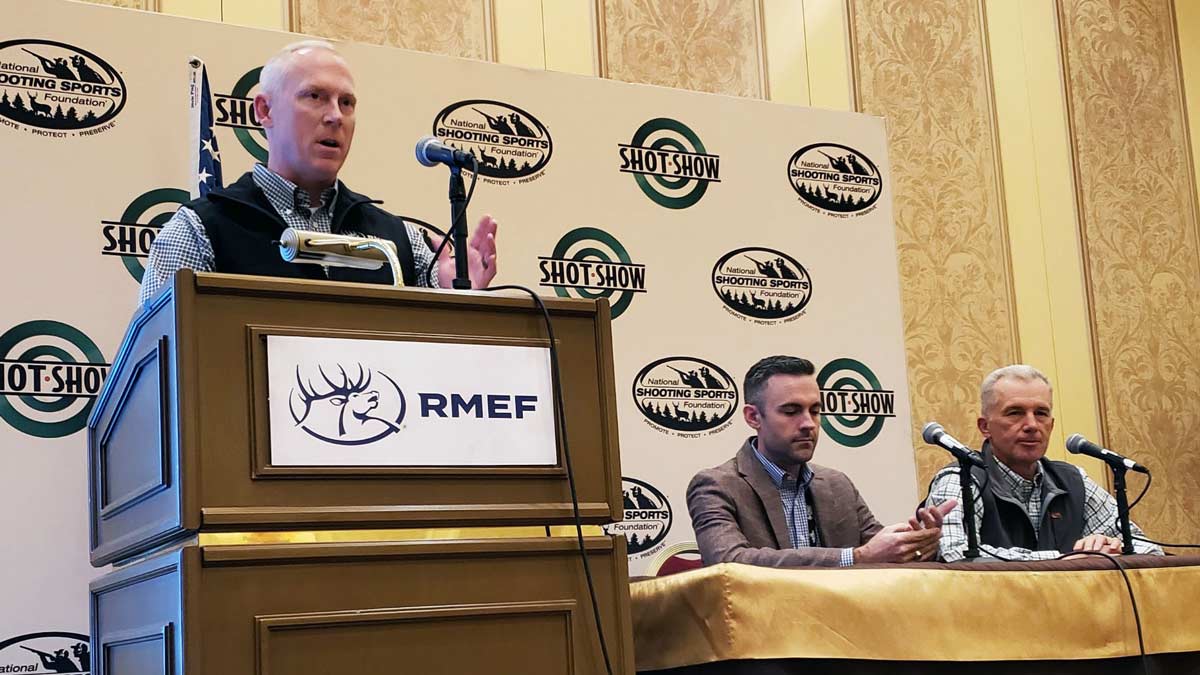 A ballot initiative to forcibly introduce wolves into Colorado is reckless, dangerous and will have far-reaching negative impacts on wildlife, conservation funding, endangered species, ranching and the economy, as well as Colorado taxpayers. Those were just a few of the negative impacts spelled out at a recent news conference hosted by the Rocky Mountain Elk Foundation at the SHOT (Shooting, Hunting and Outdoor Trade) Show in Las Vegas. Approximately 50 members of the media and outdoor industry attended.

The measure is on Colorado’s November ballot despite previous rulings by Colorado Parks and Wildlife, Colorado’s foremost biologists and scientists overseeing wildlife management, and even though those same wildlife officials already confirmed the presence of wolves in the state.

Below are a few of the comments made during the news conference.

This effort is the epitome of what is known as “ballot box biology” – a strategy used by agenda driven extremists to usurp wildlife professional’s knowledge and authority related to complicated wildlife management issues. It is reckless, it is dangerous and most importantly, 100 percent unnecessary. Just two weeks ago, wildlife officials verified that an active pack of at least six wolves is already on the ground in the northwest part of the Colorado.

Our (24,000 farming and ranching families) are significantly concerned about this initiative. It’s extremely unfair to have the bulk of the population that lives on the Front Range making decisions on ballot initiatives whose consequences are going to be borne exclusively on people on the Western Slope.

Ballot box biology is starting with a desire outcome and making the science work backwards and really puts politics ahead of science. Species biology and species management should be done by Colorado Parks and Wildlife, by people who understand this and have said multiple times, along with the U.S. Fish and Wildlife Service, that it’s not appropriate to introduce wolves into Colorado.

We’ve got a significant population of people in Colorado. I think it’s a big fallacy for proponents of this initiative to assume that you can do something in Montana, Idaho and Wyoming and take a cookie cutter approach and be successful in Colorado.

I want to talk about the social consequences of drive-by litigation, throwing a grenade into the camp and then driving away. I will use Montana as an example. I can assure you that promises that are made will not be kept. The litigation process by which a very small minority can leverage themselves, creating distrust among communities, creating distrust among agencies is going to happen.

We (Montana) met the delisting criteria in 2001. We had plans approved in 2003. Idaho and Wyoming in 2004. This whole process, we’re checking every box and then the drive-by litigators showed up. They were not from Montana. They were from Tucson, San Francisco and other places that did not have to deal with the social consequences of neighbors having to deal with wolves. It was litigated and litigated until congressional action in 2011 finally gave Montana and Idaho management authority over wolves. The goal in Colorado will be ‘let’s follow the same model we did in the Northern Rockies. Let’s get them on the ground and once they’re on the ground, let’s walk away.’

I always say that wolves are not a canine. They’re a bovine. They’re a cash cow. Anyone who thinks this is not a profitable endeavor for those advocates who are promoting such, has not followed how this works.

If you talk to any of the scientists in charge of programs (in Arizona and New Mexico where Mexican wolf exist) and read the data, they brought up their concern about genetic swamping. If you bring in a population of very large gray wolves into their border, they’ll be in New Mexico and Arizona in short order. If you know anything about how canines breed and the dominance patterns, this will create another huge issue for that program which millions have been spent trying to have trained scientists bring back the endangered Mexican wolf.

I wish we could capture in a bottle how complicated of a social problem this created in Idaho, Wyoming and Montana. It’s not something folks in Colorado understand.

Go here to view a video that spells out the negative impacts of such an endeavor.