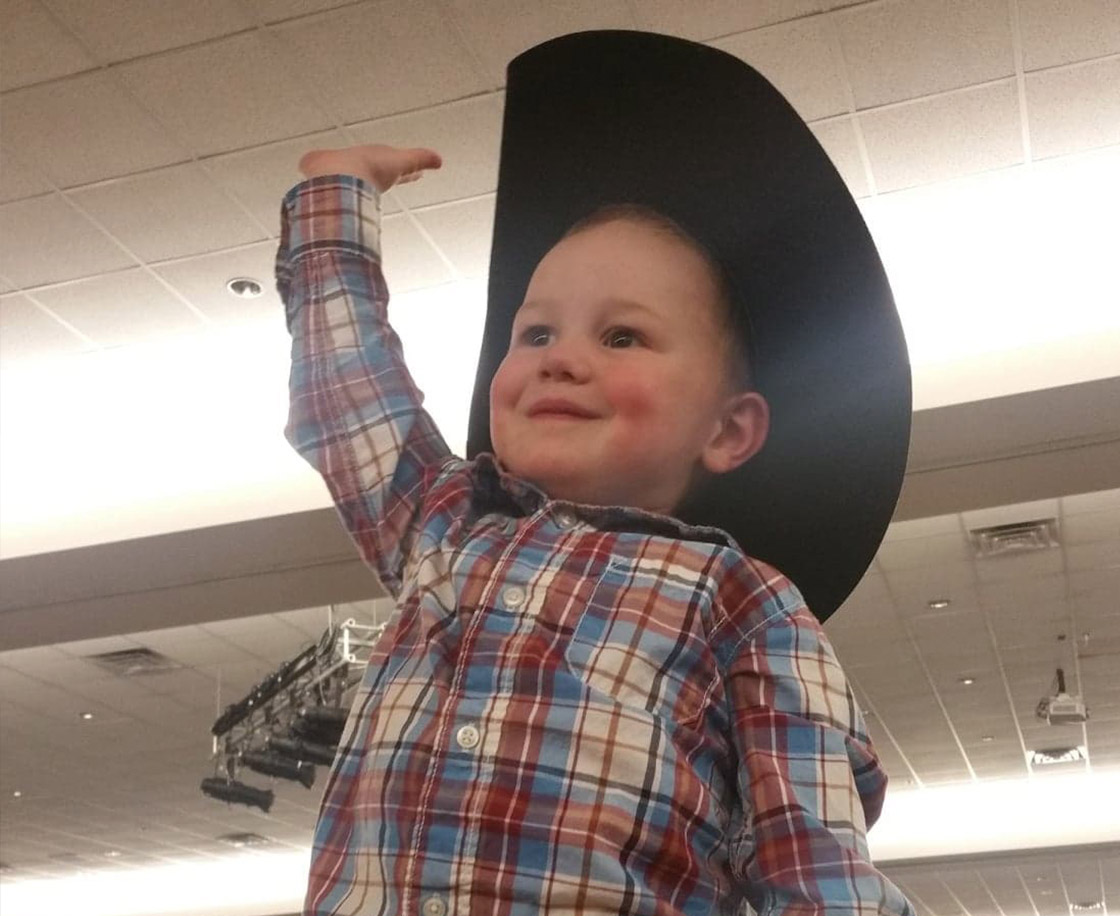 Below is a longer version of Answer the Call/Volunteers Make the Difference in the 2023 January-February issue of Bugle Magazine. It originally appeared on the old RMEF Blog and includes a recent update at the bottom of the post.

Quade Robinson was the biggest man in the house! Or at least he felt that way. And who could blame him? Sporting a black cowboy hat, plaid shirt, belt buckle, blue jeans and his cowboy boots, the determined two-year-old stood on top of a table with right hand thrust as high as he could reach and wearing a smile as big as his family’s southern Utah ranch.

Quade attended the Cedar City Chapter Big Game Banquet with other members of his immediate and extended family. It’s a Robinson tradition of sorts to attend and he is the youngest to fall in line. In fact, Quade’s father Marcus is a volunteer for the Rocky Mountain Elk Foundation, as are his parents Cal and Debbie and others among the Robinson clan. They served as past chapter committee members and step up most every year by buying a table at the banquet.

When Quade arrived at the 2016 banquet, the toddler was hyper-focused on a certain Hunting Is Conservation Red Ryder Daisy BB Gun.

“Me and my wife got there before my dad, so I showed him the gun and told him it was a live auction,” said Marcus. “So as soon as my dad, his grandpa, got there, Quade took him over, showed it to him and said, ‘That’s my gun Grandpa!’”

Quade didn’t have to wait long to get in on the bidding, the BB gun was the second item up for bid . “I stood him up on the table and told him to raise his hand. He was bidding back and forth with another little boy a couple of tables down,” said Marcus.

There were lots of smiles and laughs as the bidding duel continued. In the end, Quade came out on top and could not wait to claim his prize.

“The people liked it pretty good. We know the auctioneer from having livestock and that. He thought it was pretty neat, too,” said Marcus.

Can you just picture Quade riding the range with his father and grandfather while working the livestock on the family ranch? Can you picture him with that lever cocking, spring air action Daisy Red Ryder Model 1938 featuring a stained, solid wood stock engraved with RMEF and Hunting Is Conservation logos, smooth bore steel barrel and adjustable open rear sights? Yes, this 2.2-pound rifle with a 650-BB shooting capacity and 195-yard maximum shooting distance, a stamped metal receiver, saddle ring and leather thong is a real man’s man of a firearm—even if the little man doesn’t turn three until August.

“We’ve taken him out a couple of times and let him shoot it,” said Quade’s proud papa. “We had a lot of fun. Keep on doing what you guys (RMEF) are doing.” Quade has grown up a bit since then. He has completed trapper safety and has trapped his own bobcats and coyotes. He and his brother are my coyote hunting buddies. Quade is working on hunter’s safety right now. He is a fun little guy and is excited to be able to hunt someday.

A side note. He has a little brother named Cole, who is five, that can mouth bugle and cow chirp pretty well, too. He called in a bull two years ago on my mom’s hunt here in Utah. There is nothing better than spending time with my boys in the outdoors.